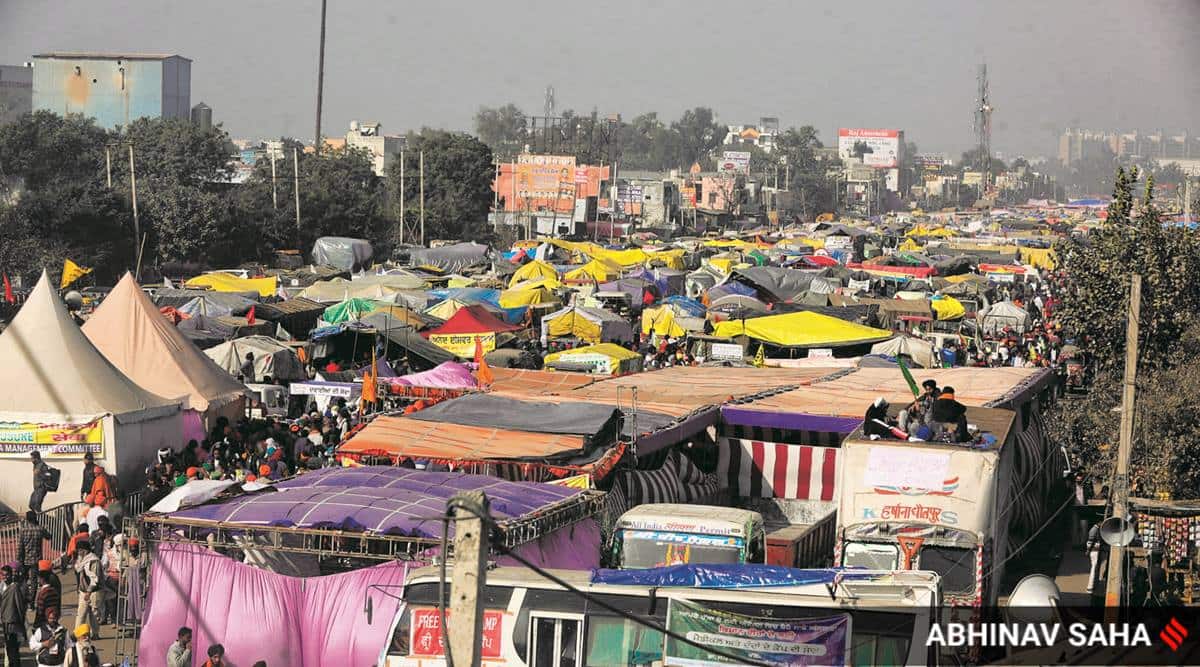 Farmers like Mewa Singh, who prepare their own food with their tractors, receive fresh supplies arriving in trucks from villages in Haryana.

More than two kilometers from the start of the peasant blockade on Delhi’s Tikri border, Mewa Singh was sitting on Rohtak Road amid heavily parked tractors and trolleys, chopping cauliflower and onions. He was preparing to cook lunch for fellow farmers from his village in the Fatehabad district of Haryana. “We are not short of supplies and we will leave only after full fulfillment of our demands,” he said – a sentiment that has been repeated by countless farmers over the past two weeks.

While the blockade at Singhu border has become the center of national attention, with major agricultural union leaders stationed there, protest at Tikri has grown over the weeks to spread across a few kilometers of Rohtak road and adjacent roads. Lacking some of the facilities available at Singhu, including foot masseurs and a 15-foot-tall boiler, it has also evolved into a tightly managed area of ​​mass protest.

Farmers like Mewa Singh, who prepare their own food with their tractors, receive fresh supplies arriving in trucks from villages in Haryana.

Also Read | Govt open to talks but not to repeal laws; farmers stage a hunger strike

“Every day trucks and trolleys with supplies from Haryana come and go past our tractors and we can pick up what we need from them – vegetables, milk, toothpaste, soap, bottled water,” said Gurjand Singh from Punjab’s Bathinda district.

Jogendra Ghasi Ram Nain, president of the Union Bharatiya Kisan, Haryana, said his union is in contact with stakeholders in various districts to transport supplies to the Tikri border.

“We are in contact with pradhans of mandi, gurdwars and people in villages, and those who brought the supplies were told they had to go to the last point of the blockade to reach everyone. Last week Uklana Mandi sent 25 bags of sugar and 1,500 liters of milk, along with toiletries like toothpaste and soap.Dhamtan Sahib Gurudwara in Narwana tehsil sent 5,000 liters of milk and one truckload of cauliflower.Ujhana village of the same tehsil sent 2,500 liters of milk and 2,500 kg of vegetables. I can’t estimate how much stock comes in every day because it keeps flowing, ”he said.

Near the stage of the protest, a closure was set up where along with cooked langar, food supplies are also available for farmers to cook at their trolleys. On Monday, turnips, turnips, onions, batua saag, palak, pumpkin, peppers, coriander, curd, milk packets preserved in ice water, salt, bread and spices were lined up for them.

The general management of the Tikri website is overseen by a 10-member committee with representatives of Punjabi peasant unions.

“Our work is under the guidance of the larger 30-member committee at Singhu border to ensure that this long struggle is conducted democratically and without violence. Every day the stage is arranged from 11 a.m. to 4 p.m. Every person who wants to talk, has to send all the information about himself, and that has to be approved by the committee.No one can talk for more than five minutes so that everyone has a chance to speak for peasants.But we say very clearly that it is not possible to talk about religion and trying to talk about one’s political party, ”said Pragat Singh, secretary of state of BKU Rajewal, Punjab.

At the foot of the stage also sit members of the “Foundation Committee,” which coordinates incoming donations. From time to time people approach them and make donations – some giving 1,200 rupees, some more than 5,000 rupees – and they note information about them.

Also Read | Delhi BJP gets message from above: Use social media, resume publicity to protest

“Every morning at 9 o’clock, we collect all the money from the day before and distribute it where it is required. On Sunday we received 35,000 rupees. About 20,000 rupees is the amount required for the daily expenditure and coordination, ”said Sukhjinder Singh, a member of the founding committee.