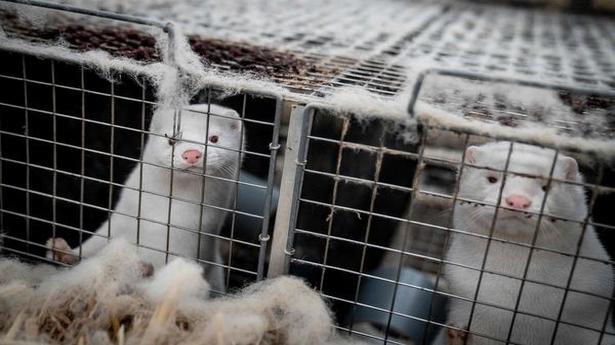 The USDA said it reported the latest case to the World Organization for Animal Health, but said there is no evidence that the virus has spread in wild populations around infected mink farms.

The U.S. Department of Agriculture said Monday it has confirmed the first known case of coronavirus in a wild animal, mink.

The discovery raises concerns about mink outbreaks, as the virus has killed more than 15,000 farm minks in the United States since August.

Global health officials are investigating the potential risk the animals may pose to humans after Denmark last month began a plan to eradicate its breeding population of 17 million, warning that a mutated coronary strain could be transferred to humans.

The USDA said in a notice that it confirmed the case in a “free wild mink” in Utah as part of wild surveillance around infected farms.

Several animals of different natural species were tested and all were negative, added USDA.

The agency said it had notified the latest case to the World Organization for Animal Health, but said there was no evidence that the virus had spread in wild populations around infected mink farms.

“To our knowledge, this is the first free, native wild animal confirmed with SARS-CoV-2,” the USDA said in the notice.

The virus has also been found in zoo tigers and domestic cats and dogs.

You have reached your limit for free articles this month.

Find a mobile version of articles from the daily newspaper in one easy-to-read list.

Enjoy reading as many articles as you want without restrictions.

Choose a list of articles that match your interests and tastes.

Move smoothly between articles while our pages load immediately.

Single shop to see the latest updates and manage your preferences.

We keep you informed of the latest and most important developments, three times a day.

* Our Digital Subscription plans currently do not include the email, crossword puzzle and printer.

Letter from the Editor

Your support for our journalism is invaluable. It is a support for truth and justice in journalism. It helped us stay fast with events and happenings.

The Hindu has always represented journalism in the public interest. In this difficult time, it is becoming even more important that we have access to information that affects our health and well-being, our lives and livelihoods. As a subscriber, you are not only a beneficiary of our work, but also its enabler.

We also reiterate here the promise that our team of reporters, editors, departmental supervisors, designers and photographers will deliver quality journalism that will stay away from self-interest and political propaganda.