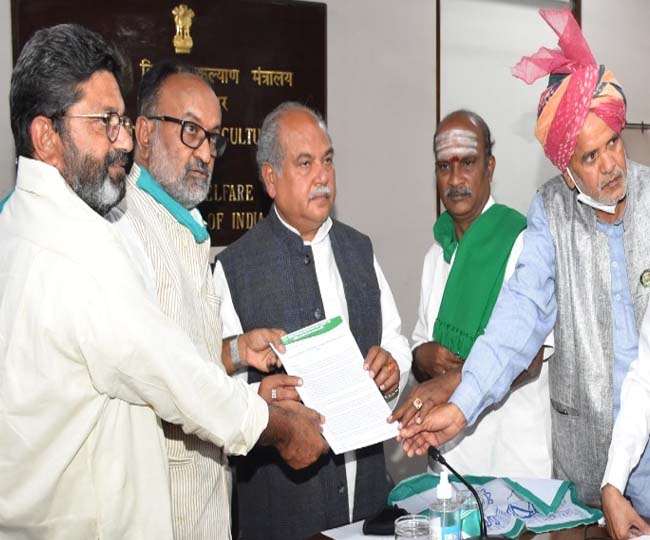 New Delhi The farmers’ protest at the Delhi border against the Centre’s new agricultural law has been going on for the past 18 days. Today is the 1st day of the movement. Farmers have increased their performance and today they are on hunger strike. Meanwhile, Defense Minister Rajnath Singh said on the FICCI program that the government was ready to hold talks with the farmers and dispel their misconceptions. Earlier, Narendra Singh Tomar met Home Minister Amit Shah. Explain that the central government wants to remove the stalemate in the new agricultural laws through negotiations, but the farmers are adamant in demanding its return. Talks have been held several times between the farmers’ organizations and the government but no discussion has taken place.

Officials of the All India Farmers Coordinating Committee met at Krishi Bhawan today and handed over a memorandum in support of the new agriculture law. He said that the bill was in the interest of the farmers and should not be withdrawn under any circumstances. He said that the protests of the farmers of Punjab were completely influenced by politics.

>> Deputy Chief Minister of Delhi Manish Sisodia said that today the whole country is in support of the farmers, the farmers of the country are afraid of these three black laws because their implementation has brought instability in his life. When farmers protest in the streets, they are called Naxals, which is a threat to the security of their country.

Aam Aadmi Party leader Bhagwant Mann said that it was a shame that the central government was determined to accept the legitimate demands of the farmers and the holders of the entire country are forced to starve today. Its (movement) is being discussed all over the world, now it is in the form of a people’s movement.

>> BJP leader Devendra Fadnavis said that Chief Minister Uddhav Thackeray should first talk about the farmers of Maharashtra instead of commenting against Delhi. The protesters are being beaten at their homes here and the state government is talking about the rights of the protesters in Delhi and calling it an emergency.

Amid protests against three new agricultural laws by the farmers’ center, BJP general secretary Arun Singh on Monday claimed that 99 per cent of the country’s farmers are with the Modi government. According to the news agency PTI, he accused the Congress of inciting the ongoing peasant movement.

>> Madhya Pradesh Chief Minister Shivraj Singh Chouhan said that Congress should not eat political bread in the name of farmers. The farmers of the country are in favor of this law, the farmers living in Bhai Singh border are also our own. The government is ready to answer every question and solve every problem.

>> Ten farmers’ organizations across the country have held a meeting with Union Agriculture Minister Narendra Singh Tomar in support of the agriculture law. These organizations are from different states like Uttar Pradesh, Kerala, Tamil Nadu, Telangana, Bihar and Haryana and are affiliated to the All India Farmers Coordinating Committee.

>> Farmers staged a demonstration against agricultural law at Jaysingpur Kheda (Rajasthan-Haryana) border. The puppet artist said, “Through the puppet show, I want to tell the farmers that I will repeal all those laws.

Minister in the Delhi government Gopal Rai said that the Aam Aadmi Party has been supporting the farmers’ movement since day one. We turned Delhi’s stadium into a prison for farmers. The Chief Minister was arrested at home but our fight and support will continue.

>> Delhi: Farmers protesting on the Ghazipur (Delhi-UP) border today blocked National Highway-2. After this, Rakesh Tikait of Indian Farmers Union said that it will not happen again. Ordinary people are not affected. We wanted them to realize at once how important even a few minutes are.

>> Delhi: Punjab Congress MPs continue to protest against the agricultural law in Jantar Mantar. MP Gurjit Singh Aujla said, “We take part in any movement of the farmers. As long as the farmers are on hunger strike, MLA Kulbir Jira and I are also on a hunger strike.”

Union Minister of State for Agriculture Kailash Chaudhary said, “I appeal to the farmers to hold talks with the government to resolve the issues related to agricultural laws.” This is possible if farmers want to add something to these bills, but completely ‘yes or no’. Negotiations can be resolved.

>> On December 1, the Supreme Court will hold a hearing to direct the authorities to remove the agitating farmers from the Delhi border. According to the Supreme Court’s website, Chief Justice SA Bobade, Justice AS Bopanna and Justice V. The division bench of Ramasubramaniam will hear the petition filed by law student Habash Sharma. The petition states that passengers are facing difficulties due to the demonstration. Because of this, cases of corona can also increase.

>> Delhi Chief Minister Arvind Kejriwal on Monday replied to Punjab Chief Minister Capt Amarinder Singh, saying he had stood by the farmers from the beginning. Citing a media report in a tweet, Kejriwal said, “Captain, I have been standing with the farmers from the very beginning.” I fought with the Center and did not allow the stadiums of Delhi to be imprisoned from now on. I am serving the farmers. Earlier, the Punjab chief minister accused Kejriwal of taking advantage of the ongoing farmers’ movement to advance the Aam Aadmi Party’s (AAP) electoral agenda in Punjab.

>> Gurnam Singh Chaduni, president of the Indian Farmers’ Union (Haryana), said the center was continuing to buy crops as before. This means ‘buy in MSP’ for them. But we can no longer live in it. The Center is not buying crops from all the states in MSP. The government is confusing everyone in the MSP. Home Minister Amit Shah told us at the December 8 meeting that he could not buy all the two crops in the MSP, as it would cost Rs 1 lakh crore.

>> Leaders of the Indian Farmers’ Union (Ekta Acharan) organized a program last week to secure the release of prison staff. He has decided to keep himself away from the one-day hunger strike organized by the Farmers 2 Farmers Association of Punjab on Monday. Punjab General Secretary Sukhdev Singh, BKU Ekta Ujharan told PTI that the rebel leaders are not fasting.

>> Rajasthan: Demonstration in Shahjahanpur near Jaisinghpur-Kheda border (Rajasthan-Haryana) continues for the second day today. Security personnel have been deployed.

>> BKU (Punjab) general secretary Harinder Singh Lakhowal said that we want to wake up the government. Therefore, the farmer0 farmer leaders of our United Farmers Front will be on hunger strike at all the borders of Delhi from 8 am to 5 pm. Of these, 2 will be at the 25th border, 10 at the border and 5 at the UP border.

>> Delhi: Farmers leaders including Rakesh Tikait of Indian Farmers Union have been on hunger strike in Ghazipur (Delhi-UP border) since 8 am.

Delhi Chief Minister Arvind Kejriwal will fast today in support of farmers. Kejriwal had said on Sunday that he was fasting with farmers. He said, ‘I will fast one day tomorrow against the farmers. I appeal to AAP workers to join it. The Center should immediately accept all the demands of the agitating farmers and bring a bill to guarantee the Minimum Support Price (MSP).

There are reports of a split in the Indian Farmers Union (BANU) in protest of the new agricultural law. National Secretary Mahendra Singh Chowroli, National Spokesperson Satish Chaudhary and a woman farmer leader have resigned from their posts after the road from Noida to Delhi was opened.

Trade and farming in the area are being affected due to the movement of farmers on the Kundli border. Traders as well as farmers growing vegetables and other cash crops are also concerned. On Sunday, farmers and enlightened people of the area met at Rai Rest House. The meeting was chaired by Dahiya Khap chief Surendra Dahiya. The people at the meeting did not oppose the movement but said that such a gathering at the border has completely taken the people of Kundli and its environs hostage. He urged the farmers to open a road and understand the problems of the people.