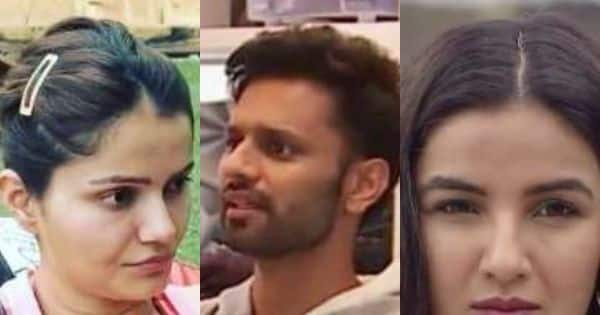 The Bigg Boss 14-final week saw a lot of twists and some surprising eliminations, leaving spectators shocked. Pavitra Punia and Aly Goni had to leave the show after losing a job. The next contestant to be eliminated was Nikki Tamboli, who received the fewest votes while Rahul Vaidya chose to leave the house, citing that he felt homesick. While Rubina Dilaik and Jasmin Bhasin joined Eijaz Khan and Abhinav Shukla as the finalists, six new challengers in the form of Vikas Gupta, Arshi Khan, Rahul Mahajan, Manu Panjabi, Kashmera Shah and Rakhi Sawant were sent into the house. Read also – Bigg Boss 14, Day 62, Preview: Bad wordplay explodes between Kashmiri Shah and Nikki Tamboli

Last week, we also saw Aly and Nikki re-enter the house. And now Rahul also re-entered the show after his voluntary departure. This brought together many of the original Bigg Boss 14 contestants. They all had a huge trip inside the Bigg Boss 14 house. We saw people fighting, commenting on personal issues, launching personal attacks, launching tantrums and nothing. Many times we also saw them arguing about kitchen chores. It seems they didn’t like working in the kitchen. While some were separate from their duties, some did not cause battles. Read also – Bigg Boss 14: Jaan Kumar Sanu casts a shadow over the return of Rahul Vaidya; writes, “Bigg Boss becomes Bigg Resort”

We saw the contestants lose it and leave the game and we also saw some just enter the house for entertainment. Everyone has their own travels. So we did an audience survey of these six contestants, namely Rahul Vaidya, Nikki Tamboli, Jasmin Bhasin, Rubina Dilaik, Abhinav Shukla and Eijaz Khan – to determine whose trips the public liked the most so far. Read also – Bigg Boss 14: Vikas Gupta puts out a video, after eviction; says; – I was in a vulnerable state; apne hi hurt karte hain ‘

Keep an eye out for this space for the latest updates on Bigg Boss 14.