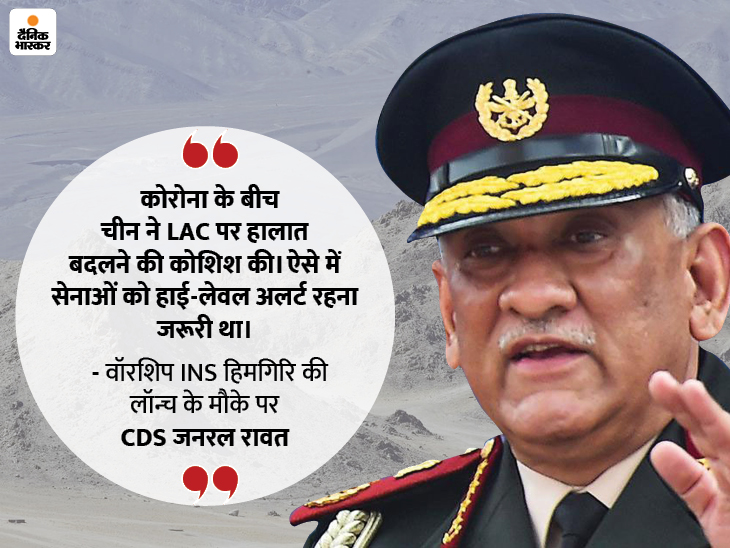 Chief of Defense Staff General Bipin Rawat said that the Indian Armed Forces was fully prepared to face any situation. He said he would spare no effort to protect the country’s borders. Whether it is on earth or in the sky or in the water. Rawat was speaking at the inaugural function of INS Himgiri, the first frigate built under Project 117-A at the Garden Access Shipbuilders and Engineers (GRSE) yard.

CDS Rawat said that in the midst of the border dispute, the Chinese military is stepping up its activities in Tibet, but the Indian military is ready to face any situation.

The feature of the frigate warships being built under Project 1-A is that it cannot fall on the radar of the enemy.

Preparations are needed after China’s action
He said that in the midst of the Corona Emergency, China sought to change the status quo along the north-eastern border of the Line of Actual Control (LAC). Due to which it was necessary for our troops to be on high alert with full readiness. “I am convinced that our armed forces are always fully capable of defending the country on earth, in the sky and on the water,” he said.

The country is moving towards a self-reliant India
He said that the government is making every effort to promote Make in India through its policy. Under this, the concept of self-reliant India is for an Indian firm to fulfill a large number of defense agreements. It also increases employment opportunities in our country.

What is Project 1 17-A?
The feature of the frigate warships being built under Project 1-A is that it cannot come under the radar of the enemy. This GRSE project gives additional power to the Indian Navy. CDS launched the first warship on Monday. According to sources, warships will be built under this project. Second and third warships 20224 and 202. Is expected to be held in

The situation remained weak from April to May
The situation between India and China has been tense since April-May. On June 15, there was a violent clash between the Indo-Chinese forces in the Galvan Valley of Ladakh. Twenty Indian soldiers were martyred. More than 0 Chinese soldiers were killed. Various steps have been taken between the two countries at the diplomatic and military levels to reduce border tensions. India has deployed about 100,000 troops to fight the Chinese army in Ladakh.