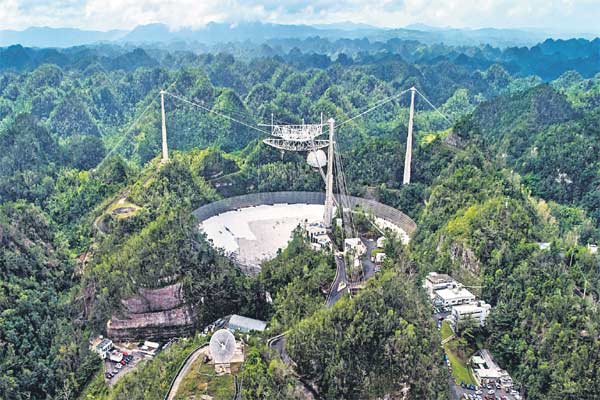 Arecibo Observatory, an astronomical observatory, is located 16 km south of the city of Arecibo in Puerto Rico.

Puerto Rico’s massive Arecibo telescope, famous for its stellar contributions to astronomy, collapsed in December, leaving the scientific community shocked and distressed. The collapse also destroyed many Puerto Ricans, for whom the observatory was culturally significant. Let us read in detail the role of the observatory in world astronomy

Arecibo Observatory, an astronomical observatory, is located 16 km south of the city of Arecibo in Puerto Rico. It was the site of the world’s largest single radio telescope until FAST in China began observations in 2016.

The second largest single-plate radio telescope in the world, Arecibo has withstood many hurricanes and earthquakes since it was first built in 1963. Even before its collapse, experts expressed alarm about the state of the telescope and recommended controlled demolition of the whole. structure.

The antenna structures could move in any direction, making it possible to track a celestial object in different regions of the sky. The observatory also had an auxiliary 30-meter (100-foot) telescope, which served as a radio interferometer and a high-power transmission facility used to study the Earth’s atmosphere.

In August 2020 a cable lifted the central platform broke and created a hole in the dish. After a second cable broke in November 2020, the U.S. National Science Foundation (NSF), which owned the observatory, announced that the telescope is in danger of collapse and that the cables cannot be safely repaired. NSF thus planned to cancel the observatory. On December 1, 2020, days after NSF’s announcement, the cables broke, and the central platform collapsed into the dish.

A platform for important discoveries

Scientists using the Arecibo Observatory discovered the first extrasolar planets around the pulsar B1257 + 12 in 1992. The observatory also produced detailed radar maps of the surface of Venus and Mercury and discovered that Mercury rotated every 59 days instead of 88 days and not always. show the same face to the Sun.

A NASA historian has confirmed that Arecibo’s lunar radar maps were used to determine a landing point for the Apollo 11 mission, the first human landing on the moon.

U.S. astronomers Russell Hulse and Joseph H. Taylor, Jr., used Arecibo to discover the first binary pulsar. They showed that it loses energy by gravitational radiation at the rate predicted by physicist Albert Einstein’s theory of general relativity and they won the 1993 Nobel Prize in Physics for their discovery.

Now you can get hand-picked stories Telangana Today plu Telegram every day. Click on the link to subscribe.