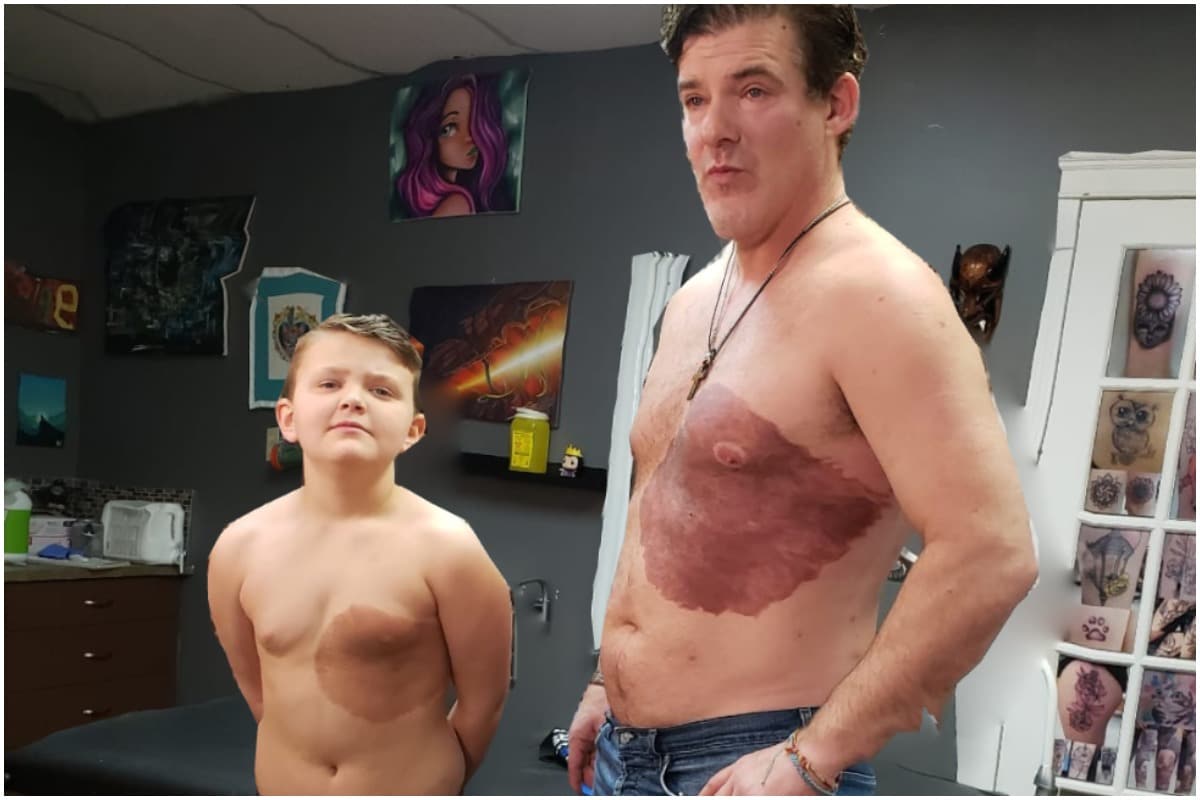 A father sat under the needle for 30 hours for him to tattoo his son’s birthmark. Alberta’s Stone Plain father Derek Prue Sr did so after he realized his son refuses to take off his shirt in the pool. His son Derek Jr. has a big birthmark on his chest.

Derek says his son was proud of his birthmark, but then he spotted the 8-year-old trying to hide it. To make sure his son wasn’t the only one to have the birthmark, the father received a tattoo of the same, the Daily Mail reported.

Dad secretly went to tattoo artist Juicy Quill Tattoo for nine sessions to get this tattoo, which looked like his son’s birthmark.

Derek said that when he went for the first sitting, he assumed the tattoo was done because he had been tattooed for four hours. However, when he asked the tattoo artist if his birthmark tattoo was done, the artist told him that he had only done the sketch so far.

To reduce the pain, Derek received numbness treatment several times. The treatment had to be given due to the size and position of the tattoo. Tony Gibert, the artist who did the tattoo at Derek’s, said, “That area of ​​the body, the ribs, the patch area, has only very sensitive nerve endings.”

The 8-year-old’s father was frozen several times to help him with the pain. Derek revealed his tattoo to son Derek Jr. when they both went to a pool. He took off his shirt and showed the tattoo to his son, who described it as “cool”.

The son finally took off his shirt and played in the pool. He also explained that others around him don’t make fun of it, but they do ask questions about the birthmark. The son said he explains to other boys that it is a big brown mark that came with him when he was a little boy.

The tattoo artist studied the history of the father-son. They went to the studio on December 9 so that Tony could compare his work with that of the original birthmark. According to the report, Derek Jr.’s mother, Hope Marie also thanked the tattoo artist for her work.